Five days of glorious sunshine made this years Sydney Boat Show the perfect venue to get your boat fix. The Beneteau Group dominated much of the onwater Cockle Bay display with their Jeaneau, Prestige, Lagoon and Beneteau power and sail boat range. Of course Riviera, Maritimo and even Azimut were strongly competitive and the ‘Star Ship’ hospitality boat provided a fantastic backdrop to the Sunseeker display as always. Horizon exhibited two motoryachts, one of which sold at the show and I have confirmed that Riviera and Jeaneau also made sales. Know doubt there were many more.

A sea of boats in Cockle Bay Darling Harbour

It’s the first time in twenty years that I have been to a boat trade show and have not been exhibiting. An incredibly liberating experience and, as I no longer represent any new boat brands, one whereby I could take an objective view of the latest offerings new to market in Australia. I was particularly looking for innovation, anything that was different from the mainstream. In a tight market, it always intrigues me to see what a manufacturer can come up with to get the edge on their competition. I really wanted to find some ingenuity rather than just the re-packaging of a tooth brush. The Pod Drive I believe was the last game changing evolution in boat design but that was back in 2008.

The Jeaneau NC14 sport cruiser represented fantastic value for money and some slick additions. I guess their shear production volume is enabling the company to keep prices down. A floating transom lounge was a unique feature which slid aft to increase the size of the cockpit for entertaining.

Under the same umbrella as Jeaneau, I poured over a new Monte Carlo 70. Uniquely looking, both outside and inside, the black carbon fibre flybridge hardtop was a stand out. I’m not sure however if the chosen light oak timber and fabric colours throughout the interior will appeal to the Australian taste though.

There seems to be a trend towards big bulwarks and coach (Side) helm doors, even on the smaller boat models. Safety, ease of handling and ventilation being the driver here I guess. I enjoy using the side helm doors when skippering the bigger motor yachts as it gives you extra vision and can make berthing when short handed more manageable. It’s half the time to reach the foredeck via this door. Most of the European motor yacht manufacturers such as Princess and Fairline fit them as standard on their larger boats.

After viewing the new Maritimo 58, I was wrapped with their attention to detail. They have really stepped up their internal finishes and will be a contender for more of the market.

Maritimo have stepped up their internal finishes and layouts

Keith Hansen, previously a Riviera flybridge dealer, has taken a bold leap of faith to launch the rebirthed New Ocean Yachts brand – now called Whitehaven Motor Yachts. He had three models on display, each a variation above the same 62ft hull. Keith’s shipwright son Ryan oversees the production of these boats which are built up in Taiwan, down the road from the likes of Horizon & Ocean Alexander.

I thought their finish and layouts were well thought out and functional. They gave a real ‘ship’ feel. The engine rooms were an absolute stand out. Access is via a water tight door in the transom, adjacent to the dinghy garage, another great inclusion. Three steps down into an enormous, well planned room with full head height, work bench, switch boards and walk around engines. Something I have previously enjoyed on the larger Horizon brand. Plenty of room for a gryo stabiliser also if requested. Pricing is very competitive in-spite of the current, unfavourable exchange rates. Worth keeping an eye on this brand.

I spent quite some time broadening my knowledge on both sailing and power catamarans. (I have had this secret passion to own a sailing cat for 20 years, although I have yet to sail on one) I viewed the Fountaine Pajot, Leopard, Lagoon and Nautitech. a variety of finishes and layouts. Like I mentioned in a recent Blog, you really need to throw out all of your monohull pre conceptions before you step aboard a cat.

In the sailing cats, ease of handling was a feature as manufacturers look more to installing self tacking headsails and electrical capstans, but the stand out for me was the retractable rear bulkhead on the ‘Bali 4.3′ model by the Catana Group, designed specifically for the charter market. What a concept, I love it! Over 30sqm of uninterrupted entertaining area.

Bali cat with bulkhead down

Basically the whole rear bulkhead slides up and under the cabin roof, a bit like a garage door but far far more refined. May I point out that most of these cats on display were built for cruising and comfort rather than speed.

My industry colleague Ric Finch from Twin disc was demonstrating a Riviera 47 flybridge which has been retrofitted to promote the Seakeeper Gyro Stabiliser and the Express Joystick System. Interesting to see just how easy it was to install the gyro. It dropped straight into the lazarette. This is a great innovation. It will solve those issues when anchored in Longreach Bay with a side swell! Many new boat manufacturers are offering stabilisation now as an option.

While at the show I was approached on numerous occasions by distributors wanting me to represent their motor yacht brands in WA. As much as I am tempted, I believe that I can offer a far better service to my customers by focusing all of my attention on the sale of pre loved quality boats and giving objective advice, so at this stage I am still a free agent. 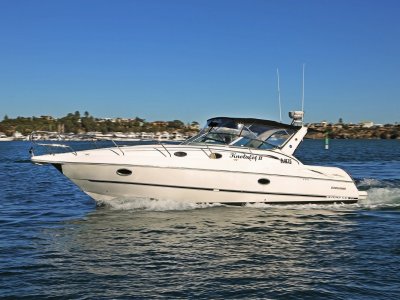